King Rutahaba Albert Ibanda Kituku II of Mitego Kingdom, DRC.  A regal man, dressed to receive the family of the bride.  And me.

Last week all the MAF pilots were handed a very beautiful red invitation to a wedding.  It turned out to be for the son of the Traditional King  on the border of Congo and Uganda.  King Rutahaba Albert Ibanda Kituku II of Mitego Kingdom, DRC is a wonderfully regal man who I throughly enjoy.  Royalty fits him like a glove. I was excited to attend, as it is a great honor to be invited and promised to be an interesting cultural experience.   A group of us went down to represent MAF. We flew the plane over the troubled Geti area, past a magnificent waterfall over the escarpment into the Semliki valley, to the dusty little Burasi airstrip beside the river which marks the border.  The Kings palace is a few Kilometers away so we were very happy that two of the three vehicles in the village were sent for us.  We had called earlier to try to get a reality check on the start time.  The invitation said 10:00 a.m. but we were told by Asante, the man who looks after the airstrip, that 12:00 should be fine.  A bit later he called back and said we better make it 2:00.  We got to the gate of the “palace” at 2:30, hoping we had not missed much.

Dave and Ashley Petersen, Kazi, Cher and myself, as well as our niece, Megan, were treated like attending heads of state.  We were taken past the crowd of 100’s of people waiting patiently, to a special government room where we sat with a number of Congolese Army officers and were given drinks.  Not long afterwards the King came in and greeted us all, sat down, and told us all that was going to happen.  The bride’s family  lives across the river in Uganda and the wedding actually took place there.  They would then come over to the Congo side and do a traditional family ceremony where they bring milk from their family cows and the bride kneels before the King and gives him a drink of milk from a gourd. After he is finished drinking she gives milk to each member of the kings family.   At some point in the ceremony the bride and groom sit on the kings lap, at different times I assume, and are blessed.  He told us that they would pay 10 cows for the Bride.  Four cows have been paid in advance and another one would be given today.  The King has hundreds of cattle and I don’t know why they spread out the process.  We would just get it over with and pay them all right now.  I think they purposely drag it out a bit as it binds the families together under a contract for a longer time.  Maybe the balance is paid after it is proven that the bride can actually have children.  After the wonderful explanation of the traditions involved I looked at my watch and realized all this wouldn’t fit into the next hour and a half and explained to the king that we would have to leave at 5:00 P.M. because the plane would have to get back to Nyankunde before sunset. He very graciously said he would have a special meal prepared for us right then and that he had duties to take care of, but would be back later.

As we waited, talking to the Army officers, I was offered  my highest price to date for the hand of Megan. I think the wedding inspired them. After asking her what her name was they asked how old she was and scoffed at the answer, immediately reducing it by ten years.  I said American women were too much trouble, it was not a good idea, and anyway my beautiful Cher had cost 100 cattle. One colonel offered 200 cattle for Meg. I said it sounded good, but I would have to see them first, I was not taking any babies and they would have to be in very good shape. The friendly banter at Megan’s expense passed the time.

We were brought to a table set just for us in his personal dining room, with wonderful local beef, chicken, rice, potatoes, plantain, matoke, chapati’s, pineapple and watermelon.  We were watched over by a very pleasant Ugandan Colonel who regaled us with stories of his world travels and his herd of Ankole Cattle. Everything was delicious, but even after eating our fill we had hardly put a dent in the food.  We felt very spoiled.  After the meal we were led out to take our places in front row seats where the rest of the crowd had been waiting. We listened to music thinking we would love to see the rest of the wedding celebration, but the Bride and Groom never showed up.  As our time was running out, we had to go.

Others were served as we anticipated the arrival of the bride and groom, Douglas an Priscilar. Everything was “Ntamo Sana”, very sweet!

The King escorts dignitaries from Uganda past the ten layer wedding cake as we wait for the bride and groom to arrive.

I had a last audience with the king and gave him the gift we had brought for the newlyweds.  The master of ceremonies made an announcement to the crowd explaining why we were leaving before things got started and people nodded and waved their goodbyes. We told the MC we would fly by as a salute to say a goodbye blessing and wish the couple all the best for a happy life together.  As we drove back on the dusty trail to the airstrip, we could see the wedding party just arriving by barge on the Congo side of the river.  But we could not wait.  The sun was rapidly setting. 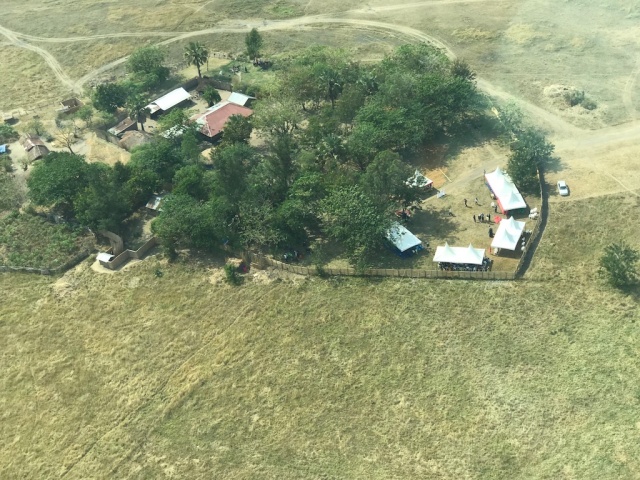 Flying by the king’s palace to say goodbye and salute the newlyweds.

It was a beautiful flight back from a wedding without a couple.  There is landscape so wonderful it really needs to be walked but alas, the militia group in the area make it a hike that will have to wait.  All in all it was a lovely day. 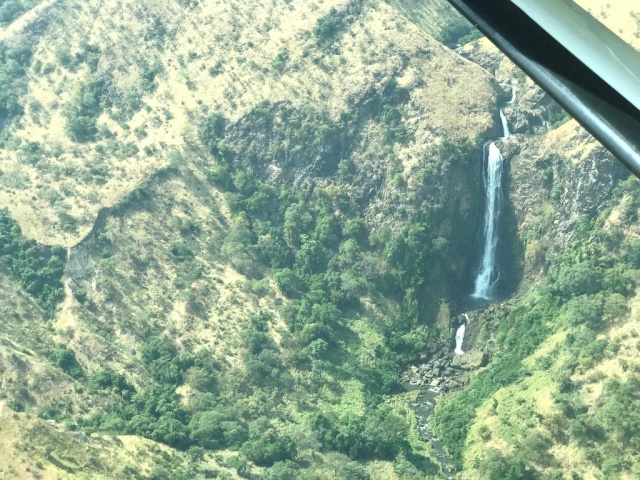 A river I want to walk someday in more peaceful times. There are so many waterfalls on its course, each needing time to explore. I hope I will get a chance.

This entry was posted in Amazing Africa, Cuture, Life in Africa and tagged King and country, Royal wedding. Bookmark the permalink.